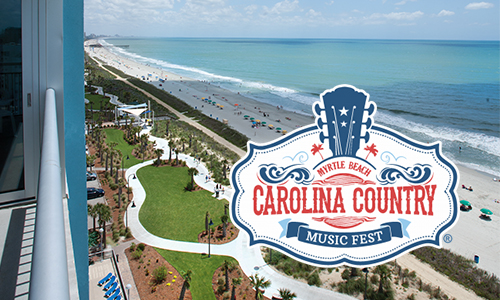 Another summer on the Grand Strand, another edition of the largest three-day outdoor country music festival on the East Coast. That’s right — the Carolina Country Music Fest is returning to the Myrtle Beach oceanfront for its fifth year in June 2019, and thousands of country music fans will once again flock to the Carolina coast to kick off summer with lots of friends and some of country music’s biggest stars.

The official dates have been announced for the festival’s 2019 installment: June 6-9, 2019. And for fans looking to guarantee a great spot to stay near all of the action, it’s high time to reserve your accommodations at Bay View Resort which is located right on the Myrtle Beach oceanfront just steps away from the main venue.  Bay View Resort offers a wide range of rooms, efficiencies and suites, all representing the best in modern oceanfront dwellings. Bay View Resort is right on the boardwalk and easy access to many restaurants, bars and of course the CCMF main stage.

This year’s Carolina Country Music Fest will again feature dozens of country music’s biggest names, and a pair of headliners have already been announced — Dierks Bentley and Alabama. Of course, more big names will be announced in the coming months (previous CCMF editions have included 30-plus acts performing on three separate stages), so stay tuned to the CCMF website for more major announcements.

While most fans will already be familiar with the already-announced (and stellar) headlining acts, here’s a quick rundown for those who might not be acquainted:

Dierks Bentley: With dozens of chart-topping singles and nine well-received studio albums, award-winning singer/songwriter Dierks Bentley is one of country music’s most respected (and least predictable) artists. Fans might recognize some of his top tracks like “I Hold On,” “Woman, Amen,” “Black,” “Every Mile a Memory” and, especially appropriate for CCMF, “Somewhere on a Beach” — just to name a few.

Alabama: With a four-decade-plus, Country Music Hall of Fame career that got its start right here in Myrtle Beach, musical legends Alabama have sold more than 70 million albums while personally changing the face and sound of country music. Top hits include “Dixieland Delight,” “Song of the South,” “High Cotton,” “Mountain Music,” “Tennessee River,” “If You’re Gonna Play in Texas” and more.

Held at the former site of the Myrtle Beach Pavilion amusement park — on 18 acres of oceanfront land stretching from the Myrtle Beach Boardwalk to North Kings Highway — the Carolina Country Music Fest offers three full days of live music performed on three separate stages. Additional attractions include an array of vendor booths and concession stands, VIP areas, and more. Thrill-seeking concertgoers can even brave the on-site zip line, and the festival’s laid-back, beach-party vibe lends itself perfectly to kicking back on a beach blanket, enjoying a cold beverage or two, and soaking in live sets from your favorite country music acts.

Will full details are forthcoming for the 2019 edition, at past festivals, live performances have run from early afternoon to late night on the three festival stages on all three full festival days. Attendees can purchase General Admission, VIP, Super VIP and Ultimate CCMF Experience passes for admission, and fans are encouraged to bring beach blankets for seating. Learn more about the CCMF at carolinacountrymusicfest.com.

Book your CCMF stay with Bay View Resort Today.  One of the best locations for attending this event.