Enjoy an afternoon or evening with the Myrtle Beach Pelicans 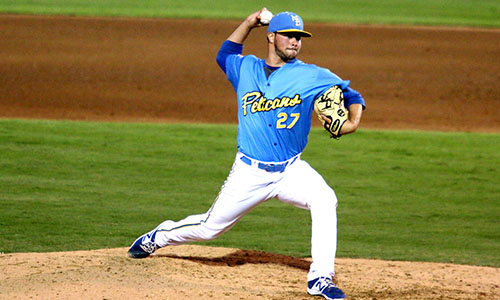 In 20 seasons of Myrtle Beach Pelicans baseball, more than 1,000 players have suited up for the Advanced Class A minor league franchise. Only 175 have made it to “the show,” and just one man has seen them all in action.

So now that it's time to name an All-Pelicans 20th Anniversary Team, it only makes sense that 20-year veteran scoreboard operator Ray Wurm help compile the list. Along with Pelicans broadcaster Scott Kornberg, who has called the latest wave of Chicago Cubs prospects, and myself, who have followed the franchise since its inception, we took a stroll down memory lane and a trip around the horn to pick the best Pelicans of all-time by position.

From the inaugural 1999 Carolina League co-championship team to current prospect Aramis Ademan, who was seven months old at the time of the franchise's first game, the Pelicans have made a big impact at the big-league level.

“I've been fortunate to so many talented players come through here,” said Wurm, 87, a lifelong baseball fan, player, and coach. “When I watch a major league game on TV it's like 'There's an ex-Pelican. There's an ex-Pelican. One of the best things about working here is seeing these young fellows coming up, making maybe $400 a month, and now they're in the big leagues with million-dollar contracts. That's the All-American success story.”

Yet not all the players who impressed in Myrtle Beach went on to play in the show. “There are some guys who never made the major leagues who were amazing in Myrtle Beach,” Kornberg said. “Yasiel Balaguert (2016) has the Pelicans' single-season RBI record. Also, Ernesto Mejia (2008) was amazing at first base for the Pelicans.”

That brings us to a few ground rules: 1) No rehab stop-offs; we will not include players who didn't stick around Myrtle Beach long enough for a cup of coffee. 2) Criteria is based on both how they performed during their stints in Myrtle Beach and in the majors. 3) We reserve the right to call a shift among the infielders and outfielders to get the top players in the starting lineup. Here's our All-Pelicans 20th Anniversary Team:

* Pitchers: Pelicans fans have gotten to see some of the biggest names in pitching make rehab starts, including Hall of Famer Tom Glavine (2008), Steve Avery (2000) and Tim Hudson (2009), but there have been several young guns come through Myrtle Beach en route to the bigs. Our starting rotation is Kimbrel, Kyle Hendricks (2012), Julio Teheran (2010), Adam Wainwright (2002) and Jason Marquis (1999), who made the franchise's first start. (Honorary spot in the bullpen for “Eastbound & Down” fireballer Kenny Powers (2011), portrayed by actor Danny McBride for the mythical Myrtle Beach Mermen while shooting season three at TicketReturn.com Stadium.

* Catcher: Hands down, this one goes to 14-year MLB veteran Brian McCann (2004), who spent nine seasons with the Braves, played in seven All-Star Games and was named the MVP of the 2010 Midsummer Classic. Currently, with the Houston Astros, the six-time Silver Slugger is looking to win another World Series ring before hanging up his mitt.

* First Base: Adam LaRoche (2001-02) did a two-year stint in Myrtle Beach while coaches tinkered with his funky but effective swing. They finally gave up and let him swing away – all the way to a successful 12-year, 255-home run major league career. Growing up around the game with his big-league father, LaRoche became a national favorite when he bypassed millions to retire early after his son was no longer welcome in the clubhouse. (Freeman might well steal this spot by the 25th anniversary team).

* Second Base: The Pelicans have had some studs at second, including underdog turned seven-year pro Marcus Giles (1999) and current Texas Ranger Rougned Odor (2013). But Torres has been burning it up in his rookie campaign with the Yankees, batting .294 with 15 homers and 42 RBIs before going on the DL just before his All-Star debut. Torres has the talent to be one of the brightest stars in the big leagues.

* Third Base: The Pelicans have had some hot prospects on the hot corner over the years, but 13-year major league veteran Martin Prado (2005) had had the biggest success at the top level. Watch out for current Rangers slugger Joey Gallo (2014) and Cubs rookie David Bote (2016) to make a run at his place on the list.

* Shortstop: Current Rangers shortstop and 10-year MLB veteran Elvis Andrus (2007) might eventually earn this spot, but no one brought more excitement to the Pelicans' ballpark in the team's inaugural season than Rafael Furcal (1999). “He changed the whole season for the Pelicans,” Wurm said of Furcal, who helped the team share the Carolina League title after Hurricane Floyd canceled the deciding Game 5. Furcal was the first Pelicans to be promoted directly to the majors after it was discovered his age was actually 21 instead of 19. Quipped then-Braves manager Bobby Cox: “He matured a lot in the offseason.”

* Outfielders: A future star was hatched in center field for the Pelicans in the form of Jason Heyward (2008-09), whose inspirational speech during a rain delay in Game 7 of the 2016 World Series was credited for ending the Cubs' 108-year curse. We put Philadelphia Phillie's center fielder Odubel Herrera in left, and 12-year big league veteran Jeff Francoeur (2004) gets the nod in right. “Francoeur had such a strong arm,” Wurm recalled. “He would throw from left field all the way to third base just to impress.”

* Managers: The Pelicans have hit the jackpot on skippers throughout the years, led by inaugural manager and current Braves boss Brian Snitker (1999-2001), who is in his 42nd season with the organization. “The staff is phenomenal,” Kornberg said. “Myrtle Beach has always had great leadership.” Local favorite and Murrells Inlet resident Rocket Wheeler (2006-11), longtime pitching coach Bruce Dal Canton, and current Pelicans manager and 2,000-plus game winner Buddy Bailey (2016-present) round out a talented staff that has helped numerous players make the climb from Myrtle Beach to the major leagues.

After a day at the ballfield, take the family back to Bay View Resort for a nice relaxing night at the beach.